Boost Confidence. Increase Marks. Get Ahead.

Boost Confidence. Increase Marks.
Get Ahead.

Why parents choose SplashLearn for their Year 5 Children? 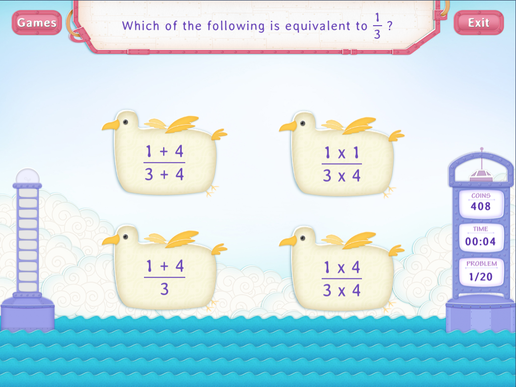 - Fill in a missing numerator or denominator to make the fraction equivalent to a given fraction.

- Understand that equivalent fractions can be obtained by either multiplying or dividing both the numerator and denominator fractions with the same number.

When commenting on how many people turned in their science worksheets before the submission date, a teacher may use a fraction like 12/24 (12 out of 24). Or, she could also say that 1/2 of the students turned in the worksheets. The two fractions convey the same meaning and are equivalent.

I want to use SplashLearn as a...

Parents, we need your age to give you an age-appropriate experience

Sorry, we could not process your request.